COM EUFOR, Major General Johann Luif, the Charge d’Affairs of the Former Yugoslav Republic of Macedonia Embassy, Mr Dimitar Mitrevsky and EUFOR Senior National Representatives (SNR) gathered on 12 January 2015 at Monument Park in Camp Butmir to commemorate the death of 11 people from the Former Yugoslav Republic of Macedonia in a helicopter crash 7 years ago. 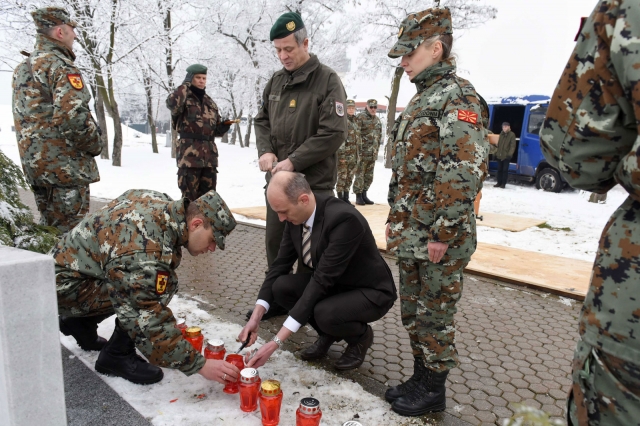 In his speech, Major General Johann Luif said: “I hope this commemoration here in Camp Butmir today adequately reflects our appreciation and understanding of the loss and pain still felt by your country. It allows us the opportunity to recall their lives, their exceptional spirit, their professionalism and their contribution to the cause of peace and stability in Bosnia and Herzegovina.”

The helicopter, a Former Yugoslav Republic of Macedonia Armed Forces MI-17, was en route from Camp Butmir to Skopje when it crashed due to bad weather on 12 January 2008. The 8 passengers and 3 crew members on-board all lost their lives.