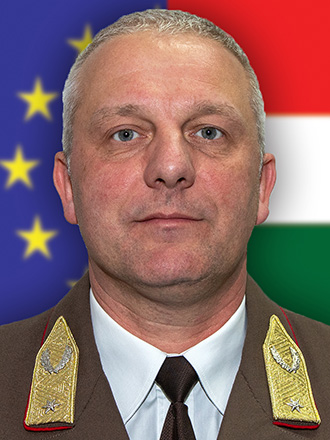 was born on 27th February 1974 in Fehérgyarmat. He began his military service in August 1992 at the Military Command Collage in Szentendre. He graduated as an artillery officer with a BSc in Land Surveying Engineering in 1996.

He served 8 years in various artillery officer assignments including 4 years as Battery Commander within the HDF 5th Mechanized Infantry Brigade 5th Self Propelled Artillery Battalion in Debrecen. During his artillery officer carear, he successfully completed the Battery Commander Course of the German Bundeswehr and also gathered experience in the field of rocket artillery. In 2003 he was deployed to the position of the 2nd Company Commander of the Hungarian Guard and Security Battalion, KFOR Kosovo.

From 2004 to 2007, he served as a Mortar Battery Commander of the 2nd Infantry Battalion of the HDF 5th Light Infantry Brigade. During these years he assumed command of the Hungarian Guard and Security Contingent, KFOR Skopje. In 2007, he was appointed to the position of Hungarian Joint Force Command J3 Branch Staff Officer in Székesfehérvár and he was promoted to Major.

In 2009, he was assigned as a Liaison Officer to the German Operations Command in Potsdam and to the German MOD Planning Staff in Berlin.

In 2010, he attended the National Defense University to undertake a MSc degree in Military Leadership and in 2012 he graduated the 7th German National Joint Admiral and General Staff Course at the Bundeswehr Command & Staff Collage in Hamburg. Following that, he was appointed to the position of the Military Assistant to the Chief of Land Forces of the Hungarian Joint Force Command and he was promoted to Lieutenant Colonel.

He is married to his wife Beatrix and lives in Várpalota.