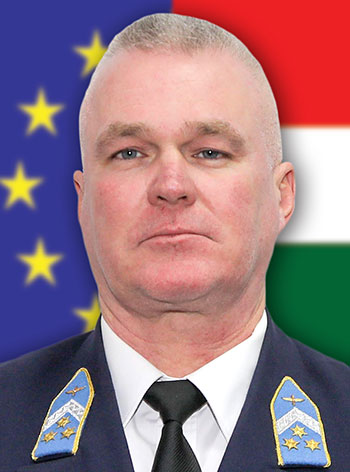 was born on 11 March 1974 in Tapolca, Hungary.
He joined Hungarian Defence Forces (HDF) as a conscripted soldier in 1992.
After the end of his military service in 1996, he was admitted to the Military Infantry Vocational School in SZENTENDRE as a Mechanized Infantry Technician and in 1998 he was promoted to Sergeant (OR-5).
Between 1998-2000, he served in the Hungarian Military Security Service as a Security NCO. From 2004 he worked at the NCO Training Centre in TAPOLCA, as a PT Instructor. From 2005 CSM TÖMÖSKÖZY served in various posts in the Hungarian Air Force (HUAF). At the HDF HUAF 54th Air Survalliance Regiment; he was a Technician NCO, Track Production Officer Assistant (TPOA), Identification Officer Assistant (IDOA) and Drill Sergeant.
In 2018 CSM TÖMÖSKÖZY became Sergeant Major of the HDF Hungarian Air Force Air Command and Control Centre (ACCC) in VESZPRÉM, Hungary.
In 2020 of August the Air Operation Commmand and Control Cenre (AOCCC) was estabilished. CSM TÖMÖSKÖZY recently is serving as a Sergeant Major of the (AOCCC) VESZPRÉM, Hungary.

CSM Tömösközy is married to Henrietta and has a daughter, Luca.