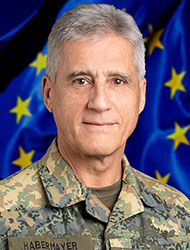 joined the Austrian Armed Forces (AAF) in 1977 and graduated from the Theresian Military Academy as Army Reconnaissance Officer in 1981. His first assignment was as a Commander of a Reconnaissance Platoon, often patrolling along the Iron Curtain, followed by the assignment as Commander 3rd Reconnaissance Company of the AAF elite Reconnaissance Battalion. In 1985, he was deployed to SYRIA and commanded the 3rd High Mountain Company of AUSBATT/UNDOF on the Golan Heights. He then was selected for General Staff training and upon completion was assigned as General Staff Officer G3 at the Military Command Lower Austria.

In 1993, he was appointed J2 in the Operations Division at the MOD, responsible for military reconnaissance and military security. He was strongly involved in maintaining situation awareness during the war in former Yugoslavia. Consequently, he became the AAF Liaison Officer to the Commission of Experts, investigating war crimes on the territory of former Yugoslavia. In 1996, he completed a posting as Chief of Staff of the Military Command Tirol, followed by the 88th Senior Staff Officers Course at the NATO Defence College in Rome. From 1998 to 1999, he commanded the famous Mechanised Infantry Battalion 35 of the 3rd Mechanised Infantry Brigade, which goes directly back to the “Dampierre Kürassiere” of 1619. In 2000, he was selected to study at the National Defence University at Washington, DC and earned a Master of Science in Strategic Resources Management. He then was deployed for a second time as National Commander of the AAF in KOSOVO.

He returned to the MOD as an expert on the AAF Reform 2010 in the J2-Branch, Operational Intelligence and Network Centric Warfare. In 2006, he was appointed Head of the Military Strategy Division. In this capacity, he was strongly involved in the transformation process of the AAF and the development of network-enabled capabilities and cyber-use in military operations. In 2010, he attended the General Flag Officers and Ambassadors Course at the NATO Defence College. Thereafter, he was promoted to Capability Director of the AAF, which included being Chief Information Officer and Cyber Coordinator of the AAF. In this capacity, he was also Cyber Defence Adviser to the National Security Council. In 2021, the Secretary General of Defence appointed him to the Cabinet of the Defence Minister to manage the 5-year Government Defence Program. Academically, he holds a Master’s Degree from the University of Vienna and a Master’s Degree of the National Defence University, Washington, D.C. He has published several articles on Hybrid Warfare and Cyber Threat and Security.

MG Habermayer is married with two children and lives near Vienna.

Major General Habermayer took over as COM EUFOR on 18 January 2023. 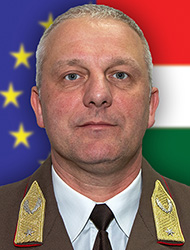 was born on 27th February 1974 in Fehérgyarmat. He began his military service in August 1992 at the Military Command Collage in Szentendre. He graduated as an artillery officer with a BSc in Land Surveying Engineering in 1996. 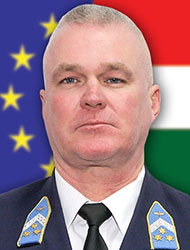 was born on 11 March 1974 in Tapolca, Hungary.
He joined Hungarian Defence Forces (HDF) as a conscripted soldier in 1992.
After the end of his military service in 1996, he was admitted to the Military Infantry Vocational School in SZENTENDRE as a Mechanized Infantry Technician and in 1998 he was promoted to Sergeant (OR-5).