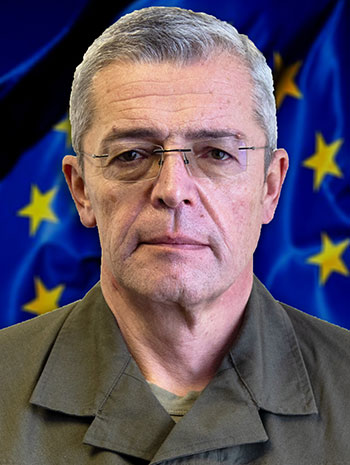 was born in Vienna, Austria, in 1965. Following completion of training in the Theresian Military Academy between 1984-1987 he was commissioned in 1987 as a Battery Commander in the Anti-Aircraft Artillery/Combat Service Support Battalion 3 of the 3rd Mechanised Infantry Brigade.

He also completed the 14th General Staff Course at the National Defence Academy in Vienna 1993-1997. Subsequent postings have seen Major General Anton Wessely serve in various operational and strategic positions within the Austrian Armed Forces. These include G5 at HQ 3rd Mechanised Infantry Brigade, Commander of the 3rd Artillery Battalion and a teacher for Staff Work and Tactics in the National Defence Academy. Additional appointments include Deputy Director in the Training Division of the Austrian Ministry of Defence, Commander of the 3rd Mechanised Infantry Brigade, Director of Training Division ‘A’ and Chief of Staff for the Defence Minister.

Furthermore, Major General Anton Wessely served as Deputy Commander of KFOR where, in 2016, he earned the United States Award ‘The Legion of Merit’. In addition to his qualifications from the Theresian Military Academy, Major General Wessely’s military qualifications include the Canadian General Staff Course/operational level, which was conducted in Toronto in 2003.

Major General Wessely is married, has two children and lives in Vienna.

On 20 January 2022, Major General Anton Wessely took over as the Commander EUFOR in Operation ALTHEA in Bosnia and Herzegovina.