Command, Control and Communication – My thoughts on 25 years of Dayton

25 years have passed since the Dayton Peace Agreement was finally signed in Paris on 14 December 1995. As the Commander of EUFOR’s mission in BiH, it is my responsibility, not only deliver on the terms of our Mandate that is derived from the Dayton Peace Agreement, but also to ensure that those under my command are ready and able to respond to any contingent requirement.

Unfortunately, a significant number of people fear ramifications without an international force present. It is too easy for the negative narrative to flourish, fostering division, driving the young generation out rather than encouraging everyone to pull together for a common European future. But I have also met so many people who are doing everything to be part of the EU family. Through both, military capability and public engagement I assure that we stand with the people of BiH and continue to monitor anything that could disrupt the safe and secure environment.

After 16 years, EUFOR Operation ALTHEA is the longest military operation under the EU’s Common Security and Defence Policy and to date the only EU land operation with an executive mandate. Having taken over from NATO, but still in partnership with the Alliance, EUFOR has led the efforts to develop and enable BiH to progress from a security consumer to a security provider. The BiH Armed Forces, today one of the most trusted institutions in the country, just recently celebrated the milestone of 15 years and are just one of the success stories. This means EUFOR must have done things right. We continue our partnership to sustain international standards and facilitate their participation in international peace support operations. Partnership and cooperation also apply to other local authorities and law enforcement agencies throughout the country.

There are repeated calls for EUFOR to be reconfigured and strengthened with additional specialized units deployed. But would this not be mistaking EUFOR for a police force? BiH is a sovereign state with an improving law enforcement sector. EUFOR as an international actor has to be the very last resort if the safe and secure environment is seriously endangered and established security structures are at risk to disintegrate. 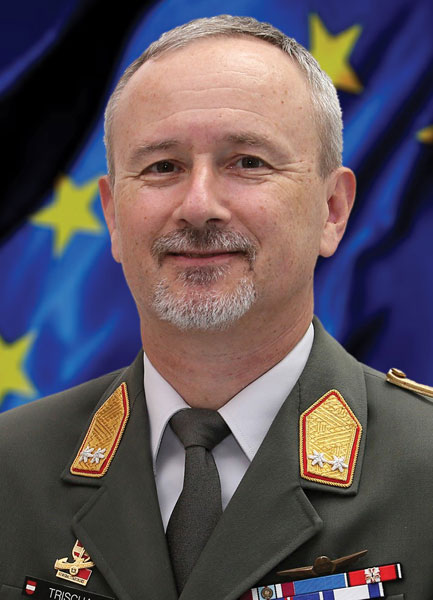 The current in-country force, gradually reduced over the years but still made up of 20 nations is a result of a progressing BiH security architecture. However, reserve forces held Over-The-Horizon at high readiness enable a rapid increase in capability. The related contingency plans are tested annually during Exercise Quick Response. Although the UK are withdrawing from the EUFOR mission, the shortfall can be made up from the remaining EU member states and the possible use of the EU Battle Group without impacting the operational capability. We continue to work with NATO on securing a better future for BiH through the Berlin Plus agreement. However, this agreement was a child of its time and absolutely plausible from a political and security perspective. As we jump to 2020 and look ahead to the future it is still valid from a political perspective, but from a military perspective the European Union has the capacity and capability to manage by itself.

Pressing threats still lie with BiH being one of the most heavily mine-affected countries in the world as well as owning significant stockpiles of dangerous weapons, ammunition and explosives held by the Armed Forces. Countering proliferation is of high importance. An entire programme with EUFOR expertise deals with the disposal of stockpiles, marking and registration of small and light weapons and storage site safety.

And while the Dayton Peace Agreement identifies demining as a responsibility of BiH, it is still EUFOR monitoring the clearance of minefields and obstacles and overseeing and mentoring the local authorities in delivering on the demining process. The Demining Battalion of the Armed Forces of BiH is now a sound capability in this area, although EUFOR support is still required. A new Mine Action Strategy seems tangible after two EU-funded and EUFOR guided projects have been finalized, providing reliable data on the actual size and location of mined areas.

This is where EUFOR’s presence makes a big difference, and I am happy that EU member states and non-EU troop contributors after so many years of effort remain committed to EUFOR Operation Althea. In 2021, EUFOR will again undergo a Strategic Review. The review will assess whether the current composition and structure of the force is still the best option to fulfil all necessary tasks, taking into account BiH’s progress on the EU path and the overall security situation in the country. My opinion, which will form part of my input into the strategic review, is that the current composition of EUFOR is more than capable of meeting current and future challenges.

The path ahead is not an easy one. The country cannot move forward without reconciliation. By togetherness and unity real change can be made which will fulfil the hope and promise that was felt around the country 25 years ago. The country and those in power must resist the urge to fall back into the trap of finger pointing and negative rhetoric. However, the ultimate goal for BiH is EU integration.

This process is dependent on political, social and economic reform within the country. I have met so many people who really want to bring things forward, who are exceptionally committed, who don’t want to look back but to develop structures bringing the country closer to the EU. Those in power must take their example and do the same. EUFOR will continue to work with the EU Office and Member States to enable the achievement of this.