On 16 April 2014, in Army Hall, Sarajevo, a Memorandum of Understanding (MOU) was signed between EUFOR and the BiH Ministry of Defence
This MOU is now the principal agreement that provides the framework for co-operation between EUFOR and the MoD / Armed Forces of BiH and it consolidates and streamlines 9 previous agreements between these two parties.

It has taken almost two years to reach this stage but should bring immediate advantages to the working relationship, especially with EUFOR’s capacity building and training programme for the Armed Forces and the common training serial ‘Quick Response’ between EUFOR and the Armed Forces in June of this year. 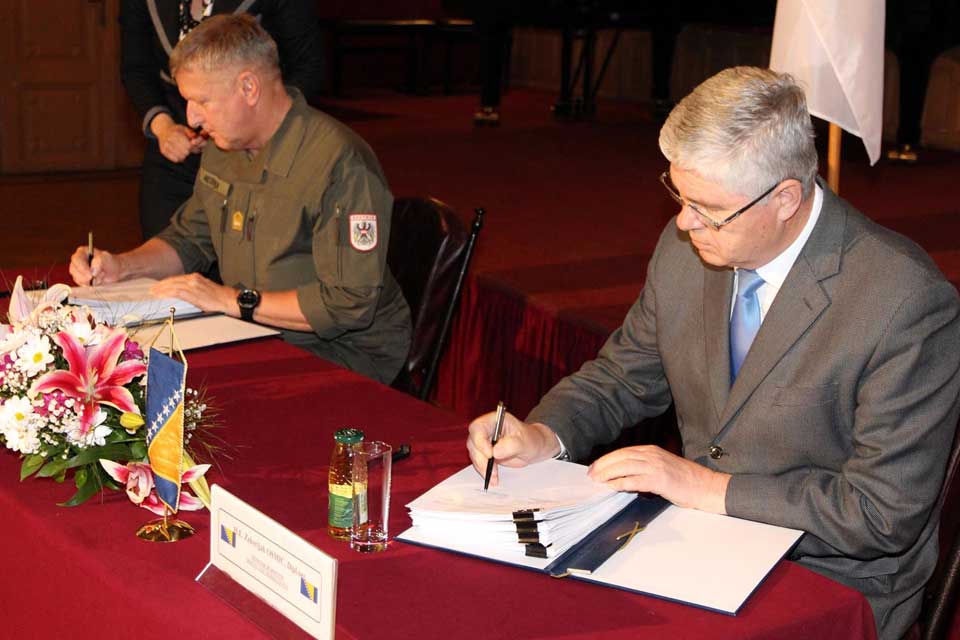 “The signing of this MOU will develop a self-sustaining training system for the Armed Forces which, along with EUFOR’s capacity building and training programme, will assist in the building of a more efficient multi-ethnic state institution and enable further Euro-Atlantic integration for BiH and its Armed Forces.

And of course the Armed Forces can be used, not only for conventional military operations, but also for other domestic tasks, such as de-mining, medical evacuation, disaster relief and other CIMIC duties. This ‘double use of forces’ is the most economical way of running the military and further contributes to a safer and more secure BiH, which will in turn lead to greater economic development in this beautiful country.”

Minister Osmić stressed the importance of EUFOR’s cooperation with the MoD for the ten years that EUFOR has been present in BiH and he said:

“EUFOR’s capacity building and training programme provides an enormous contribution to the development of the independent and self-sustaining capacity of the Armed Forces according to the standards of NATO and the EU. This enables the Armed Forces to develop a self-sustainable training system and to work together with other Euro-Atlantic forces.”

“We expect that an agreement between BiH and the EU on the participation of the Armed Forces in EU crisis management operations will be signed this year, which will enable BiH to contribute to the joint foreign and security policy of the EU.”