Today at EUFOR BiH HQ in Camp BUTMIR, a ceremony took place to mark the successful achievement of Initial Operational Capability (IOC) by approximately 500 troops of EUFOR’s Intermediate Reserve consisting of four companies from Austria, Bulgaria, Romania and Slovakia. This IOC ceremony marked the successful completion of two weeks of intensive preparation and training, so that these troops are now operationally ready to support EUFORS’s BiH security partners in maintaining a safe and secure environment for all citizens. 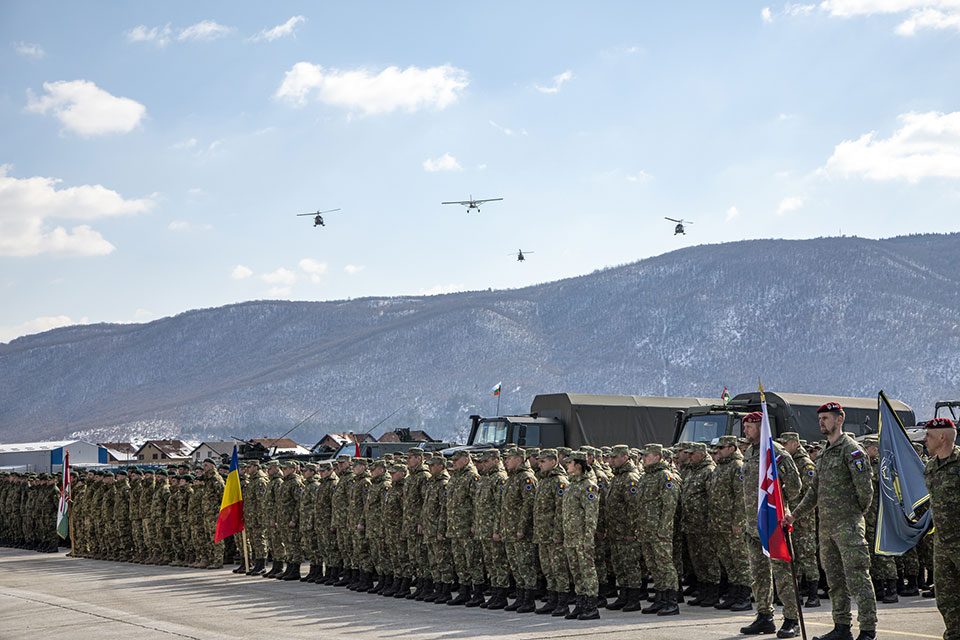 The Ceremony was attended by the Chair of the Presidency of Bosnia and Herzegovina, Mr. Željko KOMŠIĆ, as well as a number of local and international dignitaries. From today, all six of EUFOR manoeuvre companies will commence patrols to enhance EUFOR’s visibility nationally and strengthen EUFOR’s connection with local authorities and citizens. Their presence clearly demonstrates the EU’s commitment to Bosnia and Herzegovina.

The parade was addressed by COM EUFOR, Major General Anton WESSELY and the EU Special Representative in Bosnia and Herzegovina, Mr. Johann SATTLER. In his address, Major General WESSELY outlined the rationale behind the decision to activate this element of the EUFOR Reserve. He outlined that EUFOR’s assessment is that there is currently no threat to the safe and secure environment that would require EUFOR’s support. As a prudent and precautionary measure, in light of the deteriorating of the international security situation, it was decided to activate these reserve forces in order to be prepared for all contingencies.

Major General WESSELY acknowledged the commitment of the International community to BiH and in particular, EUFOR’s troop contributing nations. He reiterated his belief that the deployment of the reserve forces would serve as an additional means to enhance and strengthen EUFOR’s partnership with BiH’s institutions and citizens.