Helicopter airmount drills in riot gear and live firing on the rifle ranges gave the Austrian and Turkish soldiers of EUFOR’s Multinational Battalion (MNBN) a busy week during 18-22 March. 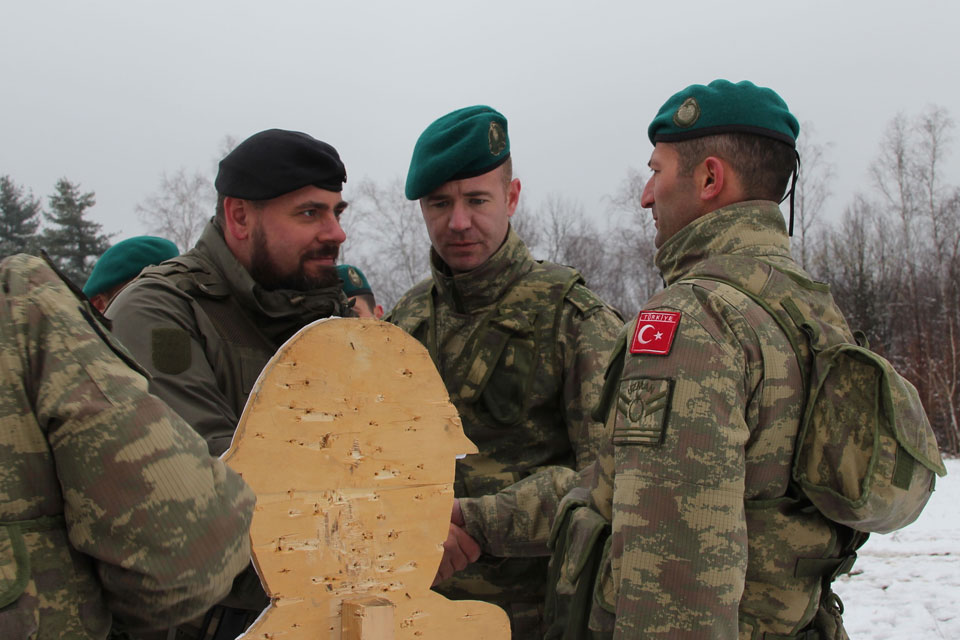 Lt Col Alfred Sanz congratulates one of the MNBN soldiers on his accurate shooting.

Regular training provides all soldiers with the confidence and ability to respond to a wide variety of situations; during a busy week of training, the EUFOR MNBN soldiers were put through their paces to ensure they were up to date with their “skills and drills”.

During the airmount training Staff Sergeant Thomas S. said: “This is my second mission with EUFOR in Bosnia and Herzegovina, but my first as a platoon commander. My responsibility is to check that the soldiers are conducting their training to the correct standard”.

For The Staff Sergeant it is another day of training, he is checking the soldiers’ placement, footwork, pace, and precision; for the soldiers it is more action-centred, and the excitement of a ride on the Agusta Bell 212 helicopter as it swoops low over Camp Butmir.

After the airmount training it was the turn of the Turkish soldiers from the MNBN to do their regular live firing drills on the rifle ranges.

Half of the 80 Turkish soldiers were using MPT-76 rifles, the other half were using the HK-33E; after zero-ing their sights with 6 shots they had to hit a target at a range of 200m, with at least 1 shot in the inner target area.

Commenting on the range day, Captain Erol Ergin said: “Soldiers are always training and practicing, this is how we ensure they stay proficient in all their core skills. The snowy conditions today are challenging, but a little bit of Turkish tea later will be a nice way to finish the day”.

The EUFOR MNBN is currently made up of troops from Austria, Hungary and Turkey, and is motorised, equipped and trained to respond to a variety of situations; the battalion contributes to EUFOR’s combined and collective training/exercises with the AFBiH.