On 16 Jul 13, the current Austrian troops held at readiness inside EUFOR’s Camp Butmir, SARAJEVO were replaced by a new contingent of Hungarian soldiers.
In accordance with Annex 1A of the Dayton Peace Accord and reviewed on an annual basis (currently UN Security Council Resolution 2074), EUFOR holds a mandate to ensure that the Safe and Secure Environment (SASE) is maintained in Bosnia and Herzegovina (BiH). 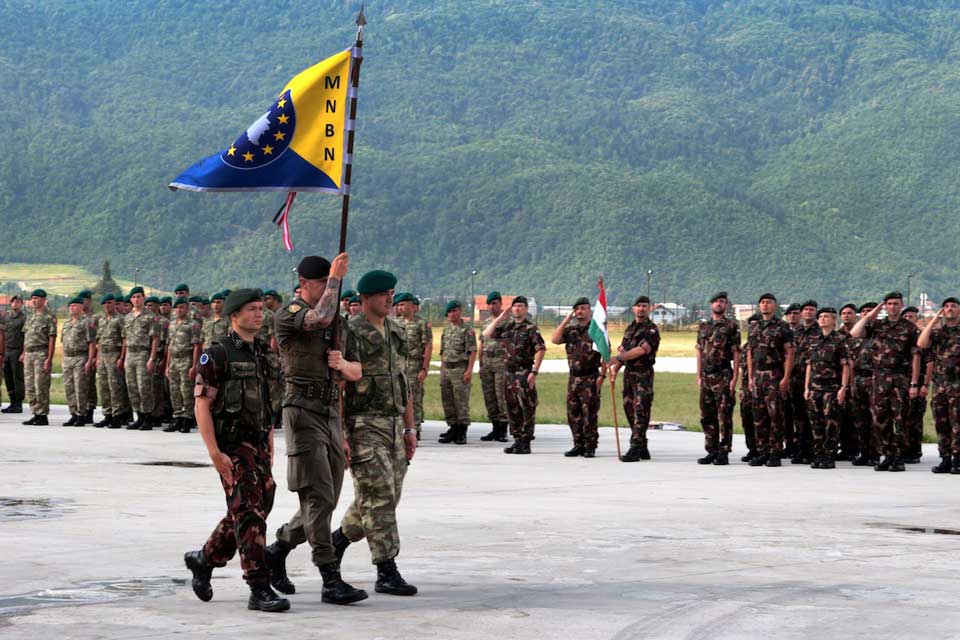 The military presence includes a Multinational Battalion (MNBN) which consists of one Motorized Company from either Austria or Hungary (on a rotational basis) and one Motorized Company from Turkey.  The Austrian and Hungarian troops are deployed on a rotational system which replaces each other every 12 months.
The handover between Companies was conducted during a ceremony presided over by the EUFOR Chief of Staff (COS), Brigadier General József Szpisják.  The event marked the official transition of responsibility from the departing Austrian infantry Company to the newly arrived Hungarian infantry Company.
The MNBN is EUFOR’s military maneuver unit inside BiH and a total of 154 Austrian soldiers have completed their mission and have been replaced by the incoming troops. At the same time nine officers and non-commissioned officers of the Hungarian Armed Forces that have served in the Headquarters of the MNBN were also changed.
Brigadier General Szpisják commended the troops for their professionalism and dedication and took the opportunity to award to those soldiers who could not make it to the last medal parade with the European Union Defence and Security Policy Medal.
The Commanding Officer of the MNBN, Lt Col Alfred Steingresz, expressed his sincere thanks to all the soldiers that have served under his command during the past six months. He applauded them for carrying out their duties in very dedicated and professional manner.
Lt Col Steingresz welcomed his new Company personnel, and expressed his pride at the high morale and standards demonstrated by the MNBN throughout his time in BiH.
The new EUFOR force structure, which is augmented by Intermediate Reserve (IR) Forces, provides the MNBN with ample opportunities to train alongside EUFOR reinforcements. In April, a 117-strong IR company from the Hungarian Defense Force and a Company from the United Kingdom arrived in Sarajevo to participate in the two-week international exercise “Quick Response”.
Between 2 and 13 September a similar exercise will take place when two Companies from Austria and Slovakia will reinforce EUFOR. Companies held at readiness within EUFOR’s Intermediate Reserve are normally stationed outside of BiH.
Quick Response practices the ability of EUFOR to rapidly integrate and deploy IR companies. During a separate phase of the exercise, soldiers from the Armed Forces BiH will also train with the international forces in order to improve their interoperability. One of EUFORs main efforts is in capacity-building and training of the AF BiH and this exercise provides the perfect platform to enable this activity and assure that the AF BiH are meeting international standards.
General Szpisják closed the ceremony by praising the soldier’s high professional standards and stated that they “have passed their test with flying colours”.  He wished the members of the Austrian Company well and a safe trip home.