Change of Command in the Multinational Battalion EUFOR

On 20 August 2013 the Outgoing Commander, Lieutenant Colonel Alfred STEINGRESZ, relinquished command of EUFOR’s Multinational Maneuver Battalion (MNBN) to his Austrian compatriot Lieutenant Colonel Christoph BLASCH. With this transfer, the unit's future performance and the accomplishment of the MNBN mission and the welfare of the troops has become the responsibility of Lt Col Blasch. 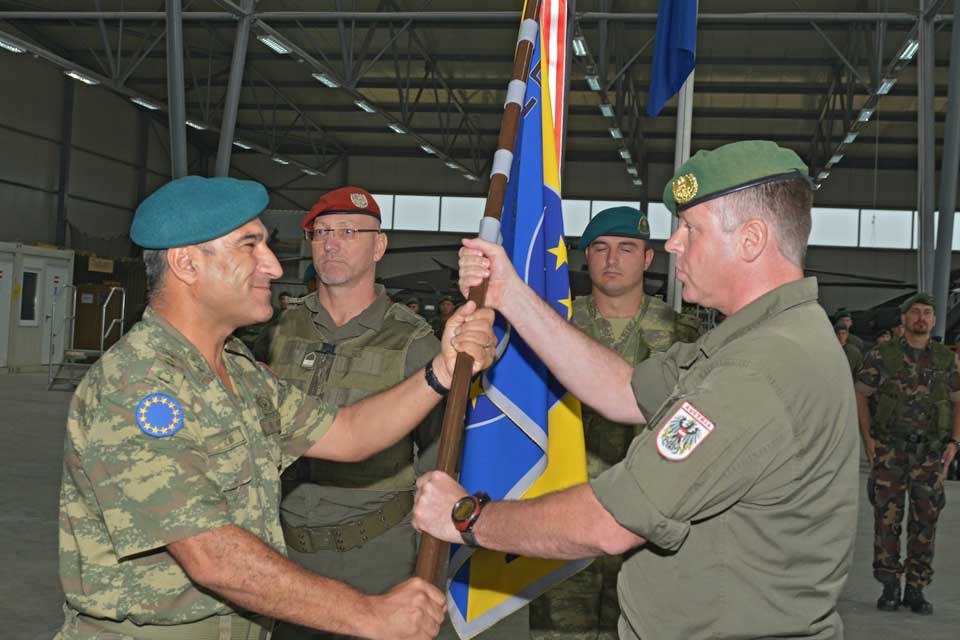 The Change of Command (COC) ceremony took place inside Camp BUTMIR and featured the ceremonial passing of the battalion colors, symbolizing the completion of the tour of duty of the outgoing commander. A change of command ceremony is a military tradition that is rich with symbolism and heritage dating back to medieval times and even today, the colors remain a broadly used symbol of a commander’s authority and stand for permanence and the unit’s military traditions.

The MNBN, presently composed of headquarters staff officers and NCOs from Austria, Hungary and Turkey as well as Hungarian and Turkish mobilized infantry companies, was established on 28th March 2007 following a downsizing of EUFOR troop levels from 6300 to 2500 personnel. Ever since, thanks to good leadership and intense training, the battalion has gained in effectiveness and flexibility and has improved in a number of ways. As a first responder to any given crisis situation, the MNBN has also maintained its ability to receive, integrate and quickly deploy additional companies that are normally stationed outside of Bosnia and Herzegovina (BiH). Those reinforcements are held at readiness within their peacetime locations and are part of the Intermediate Reserve Force system.

In his farewell speech, Lt Col Alfred Steingresz asserted that his time as the commander of the MNBN most probably have been the most rewarding and fulfilling months of his entire military career and that his tour of duty in BiH was the most satisfying of his missions abroad, because he was able to serve together with a staff that backed him up to 100 percent in every aspect. By thanking his staff and all members of the battalion, he highlighted the comradeship, the highly professional attitude, the specialized knowledge and the loyalty he was particularly impressed with. Lt Col Steingresz also stressed the excellent cooperation he has experienced when working together with the Armed Forces of Bosnia and Herzegovina throughout the last couple of months and the good relationship that was further intensified during joint training activities. As another highlight of his tour, the outgoing commander mentioned the successful integration of AF BiH staff officers into the MNBN planning group for the upcoming Operational Rehearsal “Exercise Quick Response 2”. The participation in Exercise Quick Response 1 in April 2013 EUFOR definitely was the most rewarding and challenging time, when the EUFOR multinational battalion, composed of Austrian, Hungarian, Turkish and British companies, joined by a unit from the AF BiH were given the chance to further enhance their professional training. Two remarkable achievements had been delivered from that exercise, namely the highly effective teamwork and levels of co-operation clearly in evidence between soldiers from the multi-national soldiers and the visible increase in both the capacity and capability of the AF BiH. April’s exercise “QUICK RESPONSE 2013” was the biggest EUFOR exercise within the last 5 years and showed EUFOR and AFBiH training together. A total of approximately 800 personnel were actively involved in the conduct of this exercise.

In his first address to his unit, the incoming commander, Lt Col Blasch, appreciated the great honor to be entrusted with the command of the Multinational Battalion and the fact to take over command at a quite significant moment in time, as EUFOR is presently preparing for “Exercise Quick Response 2” due to commence on 02nd September 2013. This exercise not only will provide his battalion with an opportunity to receive and integrate companies from Austria and Slovakia but also, during a separate phase, to jointly train together with the Armed Forces of Bosnia and Herzegovina. The new commander expressed his confidence that the MNBN is fully prepared to accomplish all tasks related to this exercise and training as well as all other future challenges. He stated that there are many different tasks that soldiers serving within a peace support operation have to face up to; however, he is convinced that he is taking over a unit that is ready to cope with all of them. Furthermore, he thanked his predecessor and staff for having done an outstanding job by having provided him with an excellent handover/takeover while at the same time all necessary planning for the exercise had also been accomplished. Lt Col Blasch’s slogan, “Viribus Unitis”, is his guidance for the soldiers of the MNBN - “with common effort” - only together we can be successful!