On 5 September 2013, Major General Dieter Heidecker the EUFOR Commander visited RAJLOVAC barracks, SARAJEVO to inspect the training taking place as part of the Integration Phase for Exercise Quick Response 2. Quick Response 2 is part of the EUFOR’s annual training regime and rehearses the activation, deployment and integration of over the horizon forces (Intermediate Reserve Companies) into the EUFOR structure and demonstrates EUFOR’s ability to maintain the Safe and Secure Environment. 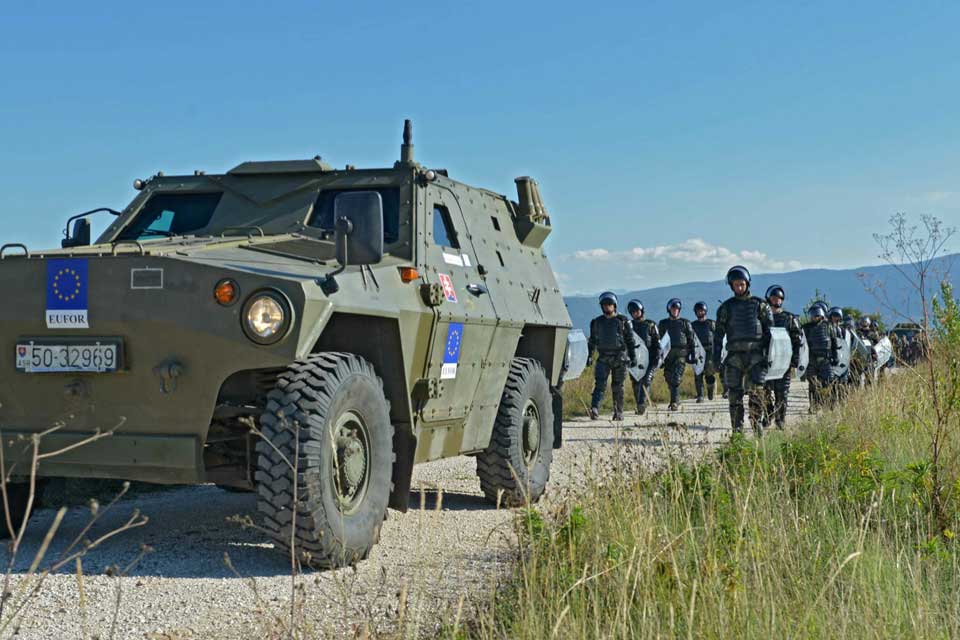 The Commander was met by the Multinational Battalion (MnBn) Commander, Lt Col Christoph Blasch, and he inspected the gathered troops which consisted of elements from both the MnBn (HUN) and one of the EUFOR Intermediate Reserve companies (SVK).
Lt Col Blasch described that the aim of the training is to: “meet common objectives and ensure that training meets specific international standards.”
The Slovakian soldiers are part of EUFOR’s Intermediate Reserve (IR) forces and arrived in BiH on 30 Aug 13.  The integration phase of the Exercise contains collective training with both the MnBn and IR forces and practices Peace Support Operations (PSOs) activities.
The MnBn and IR forces carried out a demonstration of the training they have been conducting for Major General Heidecker which includes the Evacuation of buildings, Direct Action to Rescue Hostages and Removal of Persons to a Safe Area.
Exercise Quick Response 2 consists of 4 Phases: Deployment, Integration, Training and Recovery of troops back to host nations.  The Exercise is due to complete on 13 Sep 13.
The EUFOR Commander was impressed with the demonstration and commented that it was well conducted.  He said “It is very important to regularly rehearse the activation, deployment and integration of our Intermediate Reserve Forces. EUFOR remains committed to ensuring the Safe and Secure Environment in BiH.”