On 07 September 2013, members of the Intermediate Reserve (IR) Force under the leadership of the Commander of the Multinational Battalion, Lieutenant Colonel Christoph BLASCH, and under the watchful and critical eyes of Commander EUFOR, Major General Dieter Heidecker, and Chief of Staff EUFOR, Brigadier General József Szpisják, underwent the final test before having proven their “Full Operational Capability”. 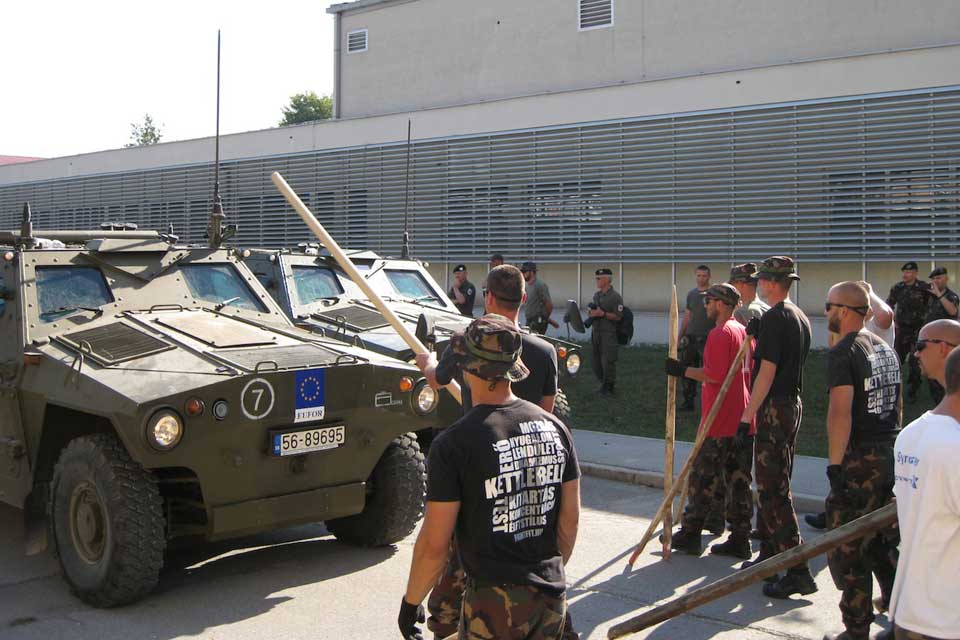 During a challenging and demanding drill, the IR companies from Austria and Slovakia, who have recently joined EUFOR as reinforcements for the operational rehearsal “Exercise Quick Response 2”, had to demonstrate their military skills by solving a series of demanding tasks typical for peace support operations. The exercise took place inside the RAJLOVAC barracks in SARAJEVO and included different scenarios that demanded accurate reaction to events such as civil disturbances, fighting in built up areas (FIBUA), protection of essential infrastructure and emergency procedures for persons needing assistance to evacuate. In the process the soldiers and their commanders were challenged to carryout search operations, reconnaissance and detection operations, patrols, checkpoint and traffic control point operations and conduct stability operations while simultaneously protecting wider security interests.

Most impressive for the spectators from HQ EUFOR was the conduct of the cordon and search operation. This is a simple mission in concept but quite difficult when applied to a terrain where the would-be subversive elements are hiding in a heavily built up area. The fundamental elements of a cordon and search operation consist of outer cordon, inner cordon, and assault. As directed by their commander, the companies were thus divided into an outer cordon force, an inner cordon force, and an assault force. The Slovakian company was responsible for the outer and inner cordon and tasked to identify and stop personnel and vehicles that are departing the objective area. They set up checkpoints and roadblocks along the major avenues of approach into and out of their objective, while the Austrians were tasked with the assault on a building where subversive elements were hiding. The assault force moved into the objective area last, secured the entry point and prepared to provide suppressive fire for the entry team should they come under fire. A second element moved through the entire objective and cleared it of all personnel before a third element searched the object for contraband, illegal weapons, or bomb-making material. Yet another element was securing all detainees and all contraband found. Once the search was complete and all detainees and contraband were secure for movement, the assault force withdrew.

This was followed by a practical demonstration of Crowd and Riot Control (CRC) techniques, featuring soldiers from the Hungarian Company as role-players, acting as a shrill crowd demonstrating against the EUFOR troops. Having made their presence know in a loud manner the crowd then got violent and started hurling projectiles at the EUFOR troops and vehicles. At this point the soldiers of the Slovakian Company, dressed in full body armour and equipped with riot gear, brought the mob under control using well practiced methods. At the conclusion of the exercise, the Commander of the Multinational Battalion, Lieutenant Colonel Christoph BLASCH, was able to report to COM EUFOR that both IR Companies have qualified and that his augmented battalion has reached its full operational capability and is now “Mission Ready in Theatre”.