On 12 September 2013, EUFOR’s two-week “Exercise Quick Response 2” climaxed with a Distinguished Visitors Day (DVD) at the BiH Army Barracks in LIVAČ.
The event began with a Press Conference which included the Minister of Defense for Bosnia and Herzegovina, Minister Zekerijah Osmić, the Head of the European Union Command Element Lieutenant (Lt) General Leonardo di Marco, the Commander of EUFOR Major General Dieter Heidecker and the Chief of the Joint Staff of the Armed Forces of Bosnia and Herzegovina (AF BiH) Major General Anto Jeleč. 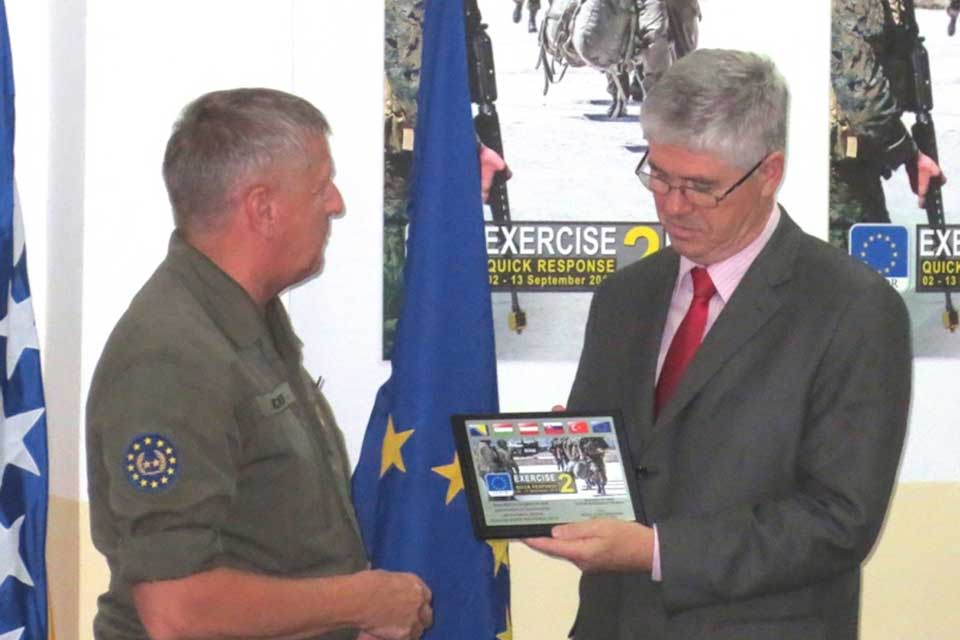 Lt General di Marco welcomed the representatives of local and international media and congratulated the Commander of EUFOR, Major General Dieter Heidecker, for his “excellent leadership and the successful conduct of the exercise.”

Defense Minister Osmić stated that: “This exercise reaffirms the determination of the EU, our partners and other international organizations to support the building of a safe and secure environment in BiH and by training the AF BiH personnel and testing the capability of EUFOR, AF BiH and local police to work together.”
Lt General di Marco said “The General stressed that Capacity-Building & Training of the Armed Forces of Bosnia and Herzegovina and the ability to maintain the Safe and Secure Environment are at the core of EUFOR’s mission and that providing a self sustaining training system and joint training possibilities to the AF BiH are greatly contributing to the Force reaching international standards.”
In his address, Major General Heidecker briefly explained the purpose of the exercise and reminded that the number of troops permanently deployed in the EU-led military operation EUFOR was reduced in September 2012 due to the improvement in the Safe and Secure Environment in Bosnia and Herzegovina. He stated that due to this the force was restructured and that the EUFOR Multinational Battalion can be reinforced with additional over the horizon or “Intermediate Reserve” troops should they be required.

The Intermediate Reserve Forces are provided by 6 EU partner nations and allow a rapid surge in EUFOR troop levels should the need arise. The process of activating, deploying and integrating these troops is rehearsed regularly and Exercise Quick Response 2 is one of these.
This Exercise has involved the deployment of 2 light infantry companies; one from Austria and the other from Slovakia, and has resulted in an uplift of approximately 250 additional troops under EUFOR control. In addition, this exercise has also been planned and conducted in close co-operation and support from BiH’s local Law Enforcement Agencies (LEAs) and development of this liaison will, in the future, lead to a greater fidelity and more realistic training scenarios.

Major General Heidecker said “the effective and efficient operation of Intermediate Reserve Forces has again…demonstrated EUFOR’s capability to perform key military tasks and demonstrate its ability to preserve the Safe and Secure Environment.” EUFOR has a strong focus on training with the Armed Forces of Bosnia and Herzegovina by running a Capacity Building and Training program and ensures that the AF BiH continue to develop as a modern armed force at the level required for Euro-Atlantic integration.
Chief of the Joint Staff of the AF BiH, Major General Anto Jeleč stated that the Armed Forces of BiH have been working together with the European Force for many years and that he is very pleased that they are able to demonstrate their capabilities through these joint exercises. He affirmed that the EUFOR Capacity Building and Training program enables the Armed Forces of BiH to develop and assure the competencies of their troops to International Standards.
Following the press conference, the guests were given a detailed overview of the Exercise and the DVD demonstration by the Chief of Staff of EUFOR, Brigadier General József Szpisják. This briefing was followed by both a static and dynamic display form the assembled troops.
The static display showed the gathered visitors examples of the weaponry and equipment used by the different nations, and the dynamic military display included a demonstration of military capability.
The distinguished visitors included officials from BiH, the EUSR, NATO and the International Community who were all able to witness a full display of well-honed military capabilities such as “securing areas from civil unrest” and “crowd and riot control tactics”.

On completion of the display, Brigadier General József Szpisják congratulated the participating troops for a superb demonstration of military capability and team work and presented certificates of appreciation to the commanders of the AF BiH. He stated that the operation rehearsal and military displays from multi-national troops was a clear demonstration that underlined the European Union’s on-going commitment in support of the Safe and Secure Environment.
Minister Osmić concluded “I express my gratitude to all the participants for their professional contribution to this exercise. The Ministry of Defence and the AF BiH are grateful to EUFOR for all their efforts in developing the capacities of the AF BiH, and I wish that the cooperation of training and other projects continues even more intensively in the future.”