Major General Dieter Heidecker after visiting the Charge d’Affaires, Dr Renzo Daviddi gave a farewell press statement summarising his 2 years of duty. COM EUFOR used the opportunity to highlight the most important achievements of his tenure, looking at EUFOR’s executive mandate of supporting the efforts of the BiH’s authorities to maintain a safe and secure environment and also the non-executive mandate of providing capacity building and training support to the Armed Forces of Bosnia and Herzegovina (AF BiH). 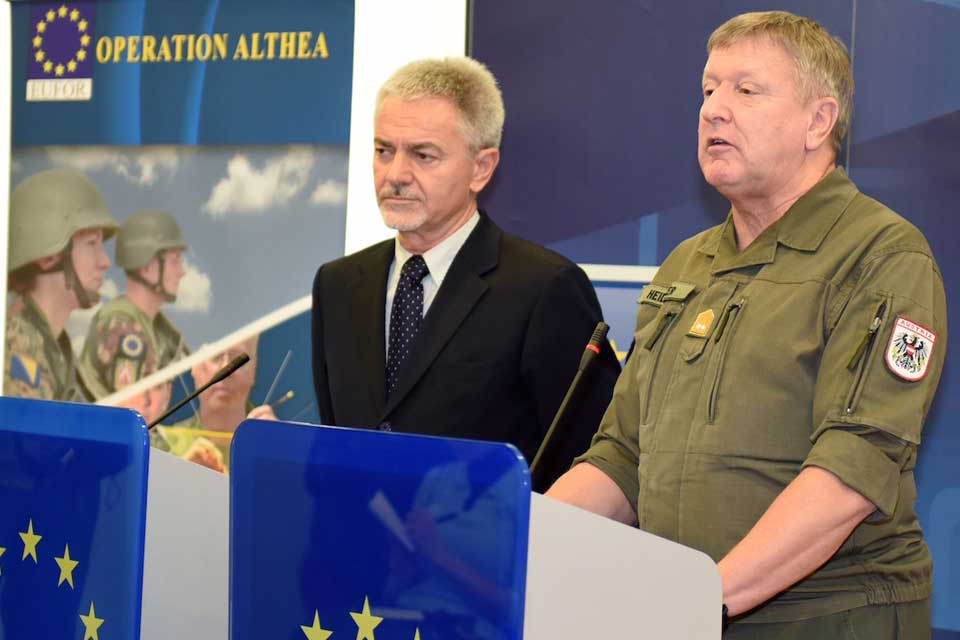 COM EUFOR, Major General Dieter Heidecker said “I have appreciated and taken benefit from being part of the European Union’s comprehensive approach. This has enabled me to command Operation Althea in a way that makes it a fully integrated instrument of the EU strategy. He added “In 2012, the Operation reconfigured and changed its focus to Capacity Building and Training of the AF BiH and a new concept has been built on retaining a minimum footprint in the country, relying on over the horizon reserves – forces remaining in their own countries, to quickly deploy if required.”
The Major General went on to talk about the two most notable developments, highlighting EUFOR’s initiatives to support the AF BiH in advancing the safety of Weapon and Ammunition Storage Sites and capacity building and training in disaster relief. Describing how during the floods in May, the AFBiH demonstrated this capability and showed that they can be considered as “much more than just an Army”.
COM EUFOR formally hands over Command of EUFOR to Major General Johann Luif during a Change of Command Ceremony on 17 December 2014 at Camp Butmir.