Children from Bosnia and Herzegovinian multi-ethnic schools from Zenica, Tuzla, Mostar and Sarajevo, participated in the Drežnica climbing camp from 29 June to 3 July. The camp was organized by the Austrian CIMIC team who provided donations and supported the event. “We initiated this project with the Colonel Michael Lasser from the EUFOR Embedded Advisory Team from Tuzla. We thought that climbing would be a perfect means to keep children of different ethnicities working together. From our prospective, it works very well”, said the 1st Lieutenant Andreas Grassberger, Austrian CIMIC Chief. 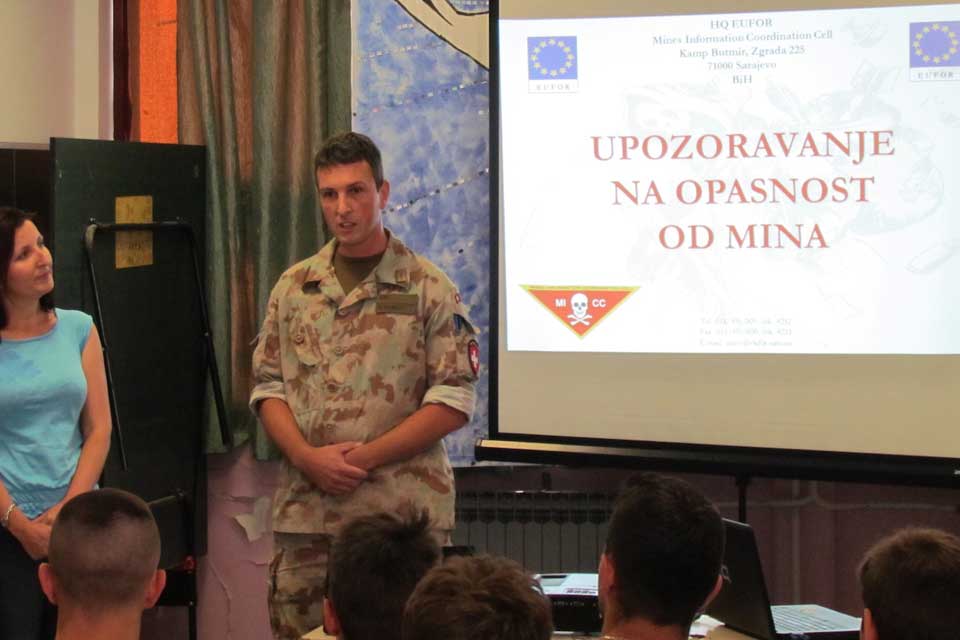 The Swiss LOT House from Mostar, together with the EUFOR EOD team organized a Mine Risk Education (MRE) lecture for participants of the camp in Drežnica. The children had an opportunity to see how much space is still contaminated with mines, and the danger that they pose. EUFOR contributes to the BiH Mine Action Strategy by conducting MRE.
“The aim of the MRE is to reduce the risk of landmines and unexploded ordnance to humans, and to make BiH a safer and more secure place. That is why the LOT Houses are doing MRE for BiH schools with the aim of informing children about the mines and UXO’s danger. It is very important they know where the mines are. Thanks to the MRE, there were not as many incidents as before, and this is a big success for all of us.
We are happy to see that the children’s knowledge about the mine situation in this country is very good. However, some children still have to learn there is a threat, and how to deal with it”, says a Private Mario Petrillo from Swiss LOT house in Mostar who provided the lecture for participants of the camp.