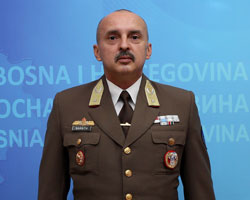 Brigadier General Ernő Baráth was born on 14 February 1968 in Nyíregyháza, Hungary. After joining the Ulyanovsk Military Academy of Communications in 1986, he took his first appointment as Platoon Commander and Deputy Company Commander of the HDF 66th Tivadar Puskás Signal Battalion in 1991.

His second posting in 1993 was to HDF Main Communications Centre, where he held the positions of Platoon Commander at the Troposphere ComCen no.2, ComCen Deputy Commander and ComCen Commander. During this posting he was promoted to 1st Lieutenant and again to Captain in 1998. Between 2000 - 2007 he served at HDF CIS Command in the positions of Commander of ComCen no.2 and Commander of Main Communications Centre. During this appointment he was promoted to Major in 2002. He attended the NATO Staff Officer Course in the Netherlands in 2005 and was promoted to Lieutenant Colonel in 2006.

In 2007-2013 he served as Chief of Operations and Training of HDF Support Brigade and in 2013-2015 he was Chief of Staff of HDF vitéz Szurmay Sándor Budapest Garrison Brigade. He was promoted to Colonel in 2014 and attended the U.S. Army War College (Senior Service College and Joint Professional Military Education Phase II.) in 2014-2015.

In 2015 he returned to his previous post at HDF vitéz Szurmay Sándor Budapest Garrison Brigade as Acting Commander of before becoming Commander in 2016. He was promoted to Brigadier General in 2017 and deployed to Operation EUFOR Althea as Chief of Staff in May 2020.

Brigadier General Baráth is married with four children and speaks both English and Russian.